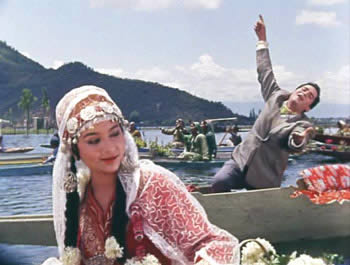 My movie reviews have decided to go down the wide memory lane now. Since there were no good or really bad movies released lately, the regular review post on my blog was searching for inspiration. Thankfully UTV fulfilled that drought by airing the Sharmila Tagore, Shammi Kapoor starer ‘Kashmir Ki Kali’.

Frankly speaking, I’m no one to review a film of this stature. KKL is an eternal love story. Set in the back drop of the lovely Srinagar, It is a story about a rich guy trying to woo a poor girl with his charm and demeanor. Rajiv (Shammi Kapoor) accidentally meets Champa (Sharmila Tagore) en route to Srinagar. He falls in love with her. They meet again later and the lovely cute love story begins to flourish. They indeed have opposition in Champa’s blind father (Dinu) who is a debtor to Mohan (Pran). Although the movie has its own share of twists and turns, it floors you with its refreshing beauty and subtlety. Sharmila Tagore is at her sweetest best. When this film was shot, she was just 17! She absolutely packs the punch with her stunningly beautiful yet sublimely sexy portrayal of Champa. Although not her first, but it was indeed her first hit movie. Shammi Kapoor exudes the right energy and charm very much required for this role. Their on screen chemistry of the couple is commendable. Hats off to the directing legend Shakti Samantha for making this movie.

What adds to the already beautiful movie is the soothing music and deft choreography. O. P. Nayyar is without doubt one of the greatest music directors we have ever had. He created the magic when we hardly had any technology in India. The songs like ‘Deewana hua badal’, ‘Isharon Isharon mein’, ‘Taarif karun kya uski’, ‘Kisi na kisi’, ‘Subhan Allah’ all are brilliant.

If you haven’t seen the movie, watch it today. Had I been a film maker, I would have immediately made my mind to re-create the magic of Kashmir ki Kali. It is wonderfully sweet!