I’d personally like to thank Chetan Bhagat for the two sensible things he did since becoming ‘the popular guy’ in India amongst the youth. One, writing and converting his immensely popular novel ‘5 point someone’ into a movie script and then choosing (or rather getting chosen by) Rajkumar Hirani to direct 3 Idiots. For this movie is sure to become one of the greatest hits in recent times. This movie, although having a ‘bollywoodish’ touch to it, does strike a chord deep within. I so much remembered my two other favourite movies in recent times, Rock On and Guru while watching the movie. No, 3 Idiots doesn’t even have a slightest of resemblance with any of the two. But like the other two, it not only makes you think, it makes you act as well. I always believed that a movie should be a work of art. It should take you on a journey of your own, within you. 3 Idiots sufficiently manages to do that. 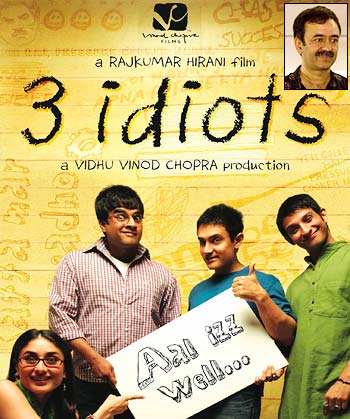 There is a difference between getting educated and becoming knowledgeable. A dialogue in the movie says, we should learn and study to become worthy and not to become successful. Success should automatically follow. And I believe, to be a knowledgeable person, some where within you need to have that rebellious attitude. An attitude that has a capacity to challenge the ‘as is’ and invent, innovate or evolve into some thing more, some thing new and some thing better. I remember during my engineering days, me and my classmate Sanjeev were struggling to get a paper presentation topic. There was a contest at IIT, Chennai and we HAD to get selected and participate. After many futile attempts at trying to learn the already presented brain heavy papers on structural engineering, we decided to do some thing on our own. We ended up presenting some thing that caught even the IITians unaware, a most economical way of building the stone columns in a marshy land. Although we didn’t win, it did receive a special mention in their record books (I suppose it is still there and has been researched by now). I cant explain the surprised look on the faces of our teachers back in our college when they learnt that two guys, one with average grades (Sanjeev) and one with non-mentionable grades (me) could do this. It was that rebellious attitude to do the difference that has carried me through all these years.

Anyway, coming back to the movie. 3 Idiots is loosely based on the novel by Chetan Bhagat, 5 Point Someone.  Loosely because the theme, the characters and the premise is the same but the story line has been altered a bit to suit the Bollywood audience (which is actually not so good). Unlike the novel, which revolves around 3 main characters, 3 Idiots revolves around 1 lead and 2 sub lead characters. Aamir Khan plays a guy called Rannchhoddas Shyamaldas Chanchad, a rich and brilliant guy, who has a central tailored role where as R. Madhavan and Sharman Joshi play Farhan Qureshi and Raju Rastogi respectively. They are all studying in Imperial College of Engineering a.k.a. IIT Delhi, headed by Dr. Viru Sahastrabuddhe (Boman Irani). The rest of the movie is about how Rannchhoddas or Ranchoo’s rebellious attitude and out of the box thinking often lands the three best friends in a soup, and as always, how every thing gets turned into a happy ending. After all, in the end ‘Aal Ij Well’. The story here bears a striking resemblance to Rajkumar Hirani’s earlier protagonist, Munnabhai MBBS. In fact, there are few sequences where you feel as if Raju has served the old wine in a new bottle. Ranchho’s altercations with the dean, his love angle with the dean’s daughter (Kareena), his overwhelming generosity, his out of the box solutions… every thing looks like ditto Munnabhai.

Coming to performances, except for the 3 Idiots and Boman Irani every one else has a short role to play, including Kareena. But all of them have done well, especially Chatur ‘Silencer’. They ensure that there is never a dull moment in the movie at all. Music by Shantanu Moitra is good. In fact ‘All is Well’ is topping the charts already. I’ll not be surprised if it has surpassed the popularity of ‘M bole to…’. If there is a healthy dose of funny moments and good songs, there are also some grey overtones where you almost feel for the characters. Raju has effectively tried to deal with the suicides and the excessive pressures of studies. The film in fact tries to give us a message, a message to follow your dreams and not some one’s expectations. It may not be strong enough to challenge the ‘Doctor ya Engineer’ typecast society and education system in India. But it sure asks questions… in fact plenty of them. Go and watch it for sure, even if you have the answers or not… 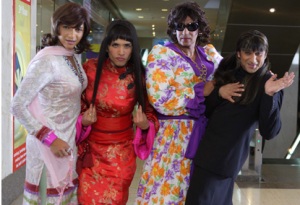 Let me give you a prologue of this review. I was originally slated to watch Fashion, even declared it on my blog earlier. However since it was also the most awaited movie (with Golmaal) and I heard a very good movie, I couldn’t get a ticket for the evening show. The next showtime wasn’t suitable for me and I settled for Golmaal Returns. I was well prepared to watch a serious, tragic drama movie but sat for a comedy pic instead. Believe me, I did not repent. Golmaal II didn’t allow me to think; it is an excellent movie.

Alright, now the review; The movie doesn’t have an interesting story to tell as such. We have a casanova guy Gopal Santoshi (Devgan) and his extremely suspicious daily soap fanatic wife Ekta (Kareena). Gopal works with a Fishery as a GM and doesn’t get along with his colleague Mehta (Apple Singh). Madhav Ghai (Warsi) is an inspector who suspects Gopal is involved in the sumggling racket. In relation to the same they get into a tiff where Gopal insults Madhav and kicks him out of his dockyard. Coincidently Madhav is the same guy who loves Gopal’s sister (Amrita Arora). And we also have a Lucky (Tusshar Kapoor) who has just carried on from the first part as a dumb brother of Ekta.

Fun starts when one night while returning from the office Gopal saves a damsel in distress Mira (Celina) and ends up spending the night with her. Despite being innocent, he hides the truth from his ever suspecting wife. He ends up telling her that he was with his friend, some Anthony Gonsalves. Enter Shreyas Talpade as Laxman Prasad who agrees to double up as Anthony to grab a job in Gopal’s firm. However, same night Gopal’s colleague Mehta is murdered. Madhav gets the opportunity to nail Gopal since the two were at logger heads. Hell breaks when the real Anthony and his wife arrive in the picture. Rest of the movie is based on Gopal’s bid to prove his innocence.

Now for the performances; A fine actor he is, Devgan excels in every department. Unlike the arrogant bossy college dropout in the first part, he acts as a classy yet clumsy GM of a company (Reminds me of Anil Kapoor in No entry). Warsi is at his best again, but I felt at times that he was under utilised. Shreyas Talpade is really cool, never do we realise he wasn’t there in the first part. But the best of the lot is Tusshar Kapoor. He has throughly marvelled in every department. Some times I feel not having to speak the dialogue has worked in his favor. His ‘Maear Yot’ is going to be the talk of town for long. For the ladies, Kareena looks stunningly slim and sexy, although she wasn’t required to expose. Except Kareena others do not have a substantial role, thankfully.

Rohit Shetty, the director, should indeed be thanked for making this movie. Whether its the spoofs of other movies and TV serials (Tashan, Black, Kasam Se, Kyunki…) or the digs at other directors and producers, (Especially Ekta Kapoor) he does it with perfection. There is always a thin line between comedy and vulgarity, insult and sattire. Thankfully Rohit managed it with such perfection and timing that you burst out laughing at virtually every second scene. Dialogues are crisp and the delivery is even better. Despite Paresh Rawal and Sharman Joshi not being a part of this, the movie rocks.