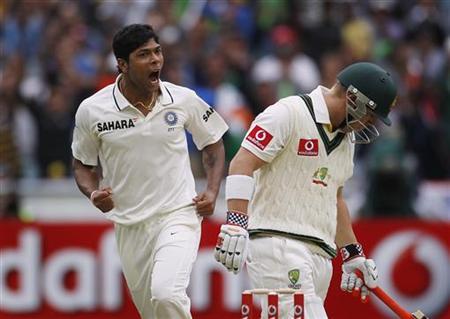 This was the most anticipated day, perhaps, for Indian cricket lovers apart from the final of the world cup that India won. To be a bit unfair to Sri Lanka, India’s victory in Mumbai early this year to become the world champions of cricket has become less of a fanfare in my memory, thanks to the fact that we won it against Sangakarra an and his men. Had it been Australia or Pakistan, it would have been different.

Anyway, let us come back to the boxing day test match. I was sort of hoping India to bat and Sachin to redeem himself with a hundredth hundred at the MCG on the boxing day. Perhaps that chance went to his counterpart Ricky Ponting and unfortunately he blew it away after a fine fifty. Yeah unfortunately because I have loved to hate that man (RP, Rick, Punter or %$@$%# whatever they call him) and I wanted him to gracefully retire with a flowing century.

The day belonged, and rightfully so, to the two youngsters. One of them is a debutant, Ed Cowan who let Australia’s batting and other Umesh Yadav who, only in his third test beautifully led Indian bowling. So the boxing day was great with both sides dealing blows, neither of them killing. Match is in the balance now and it remains to be seen if Sachin scores his hundredth hundred at the MCG or not.

I’ll not be posting more about the series here, unless he scores a century or if we win the series or both.